The Goddard Laser for Absolute Measurement of Radiance (GLAMR) laboratory at Goddard Space Flight Center (GSFC) is a state-of-the-art spectral and radiometric sensor characterization facility. The work is based on the calibration methodology developed by National Institute of Standards and Technology (NIST) called Spectral Irradiance and Radiance Calibration using Uniform Sources (SIRCUS) . The primary objective of GLAMR is to transfer the advanced calibration technique of SIRCUS into an operational facility to make it better available for characterization of airborne and satellite sensors.

GLAMR consists of several types of tunable lasers to span the solar reflective spectrum. Most of the spectrum can be produced using two homemade lithium triborate (LBO)-based optical parametric oscillators (OPO). Commercial off-the-shelf (COTS) systems are also used to cover a portion of the shortwave infrared (SWIR) spectral region. Several of the optical components of the optical cavities of the OPOs are outfitted with precision actuators that allow automated spectral tuning. The software developed to control these actuators also record the signal of radiometers that monitor radiance levels output from the integrating sphere onto the sensor under test. 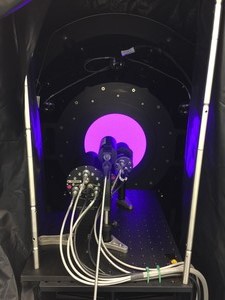 GLAMR is the light source

GLAMR is the light source enabling the transfer of the radiometric traceability of NIST’s POWR to the airborne/satellite sensor to via the transfer radiometers and sphere monitors. These efforts make use several lasers that spread the solar reflective portion of the electromagnetic spectrum and are being developed in the GSFC’s GLAMR Laboratory. Most recently, the Visible Infrared Imaging Radiometer Suite (VIIRS) for Joint Polar Satellite System-2 (JPSS-2) was characterized using GLAMR in August 2016. Future calibration plans that include GLAMR are Landsat 9 Operational Land Imager-2, Ocean Color Instrument on Plankton, Aerosol, ocean Ecosystem (PACE), CLARREO Pathfinder, and VIIRS on JPSS-2 and -3.